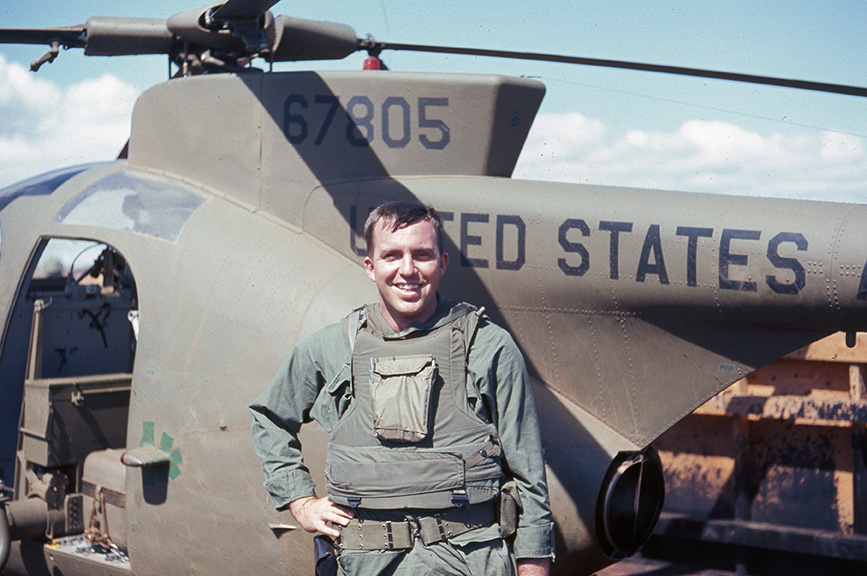 For heroism while participating in aerial flight evidenced by voluntary actions above and beyond the call of duty: Warrant Officer Smith distinguished himself by valorous actions while serving as the pilot of an OH-6A light observation helicopter conducting an aerial reconnaissance southwest of Kontum. Another helicopter received heavy automatic weapons ground fire and crashed. Warrant Officer Smith bravely hovered over the crash site to place fire on the enemy and flew over the hostile area to mark enemy positions, enabling armed helicopters to make accurate assaults on the area. He also hovered over the downed crew and provided close fire support, skillfully maneuvering the aero rifle platoon through a maze of enemy bunker complexes. He marked each enemy bunker with smoke enabling the infantry commander to advantageously assault the complex. Warrant Officer Smith provide the ground element fire support even though his aircraft was subjected to continuous sniper fire. His skill and courage contributed to the route of a superior enemy force and the rescue of the down crew. His actions were in keeping with the highest traditions of the military service and reflect great credit upon himself, his unit and the United States Army.