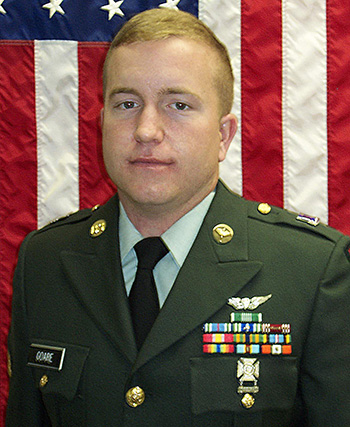 The Air Medal with “V” Device for exceptionally meritorious and valorous achievement during aerial flight on 28 June 2005 while serving as a MH-47 Special Operations Flight Engineer assigned to a Joint Task Force in Operation Enduring Freedom, Afghanistan.  Staff Sergeant Goare was a member of the 3rd Battalion, 160th Special Operations Aviation Regiment, the “Night Stalkers”.  On this date, a Navy SEAL special reconnaissance team was in extreme danger during daylight hours, surrounded by an enemy force vastly superior in numbers.  Night Stalker aviation units operate almost exclusively during periods of darkness, but the SEALs were not expected to survive unless immediately exfiltrated.  Staff Sergeant Goare responded without hesitation to serve as the Flight Engineer on the lead aircraft, call sign Turbine 33.  As the flight engineer and door gunner, Staff Sergeant Goare readied his aircraft, checked his weapons system, loaded quick reaction force personnel, and departed Bagram Airfield.  When Staff Sergeant Goare’s helicopter arrived at the emergency landing zone near the SEALs’ position, he was on its ramp observing the area below for the pilots as they hovered just prior to landing.  An enemy rocket propelled grenade entered the helicopter above its ramp and exploded inside, causing the helicopter to crash into the mountainous terrain below, resulting in the loss of life for everyone aboard the aircraft.  Staff Sergeant Goare’s valorous actions and sacrifice under the most extreme conditions reflected great credit upon himself, his command, and the United States Army.