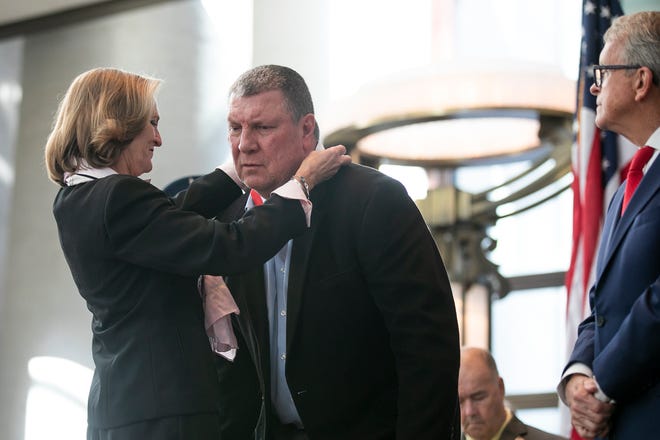 Participating in several major combat operations against the enemy in the Republic of Vietnam, including Operations Oklahoma Hills and Pipestone Canyon, Private First Class Stanley M. Barefield, Company L, Third Battalion, First Marines, First Marine Division repeatedly distinguished himself by his courage and composure under fire.  On 18 August 1969, his unit was maneuvering as the security element for a convoy when the lead vehicle detonated a well-concealed enemy explosive device, seriously wounding several Marines.  Reacting instantly, PFC Barefield fearlessly moved throughout the heavily mined area, administering emergency first aid to his companions.  While securing a landing zone, he was seriously wounded by the explosion of another well-concealed enemy explosive device and was subsequently medically evacuated.  By his initiative, superb professionalism and loyal devotion to duty, Private First Class Barefield earned the respect of all who served with him and upheld the finest traditions of the Marine Corps and of the United States Naval Service.

The Combat Distinguishing Device is authorized.