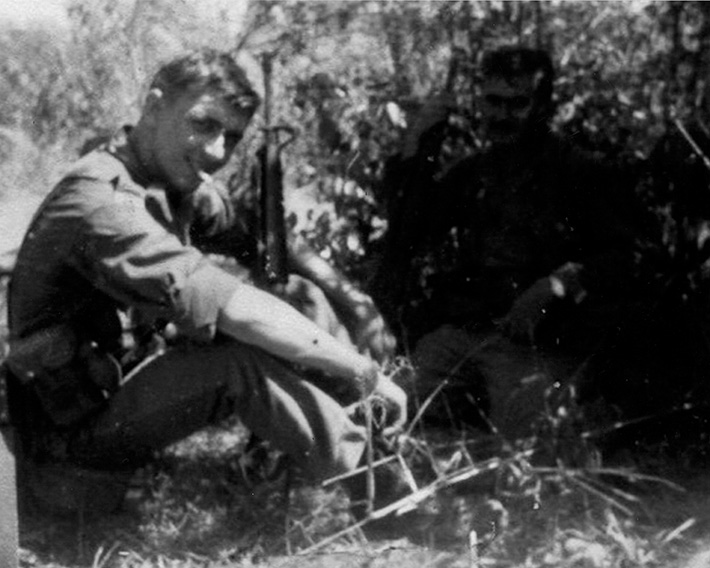 For heroism in connection with military operations against a hostile force: On 25 August 1966, Sergeant Richards’ company was participating in a multi-battalion road clearance operation along highway 16 near Binh Duong Province. Suddenly his unit was called to the assistance of a friendly element which had become heavily engaged with the long-sought insurgent Phu Loi Battalion. As the company approached the elaborate Viet Cong trench and bunker system, its forward movement was halted by a barrage of intense mortar, small arms, and automatic weapons fire. Traveling with the command group, Sergeant Richards was responsible for keeping constant communications with all companies in the battalion. During the height of the raging conflict, the command net became jammed and, consequently, Sergeant Richards served as a messenger to the forward units. In his efforts to pass vital information, he constantly challenged the devastating fire of the hostile forces by crossing open areas and traveling through sniper infested regions and machine gun killing zones. Late in the afternoon, in spite of the concentrated and continuous Viet Cong fire hampering the extraction of wounded and the resupply of the battalion, Sergeant Richards made his way to an unsecured landing zone and helped load and unload the evacuation and resupply helicopters. In the evening, he constantly traveled from company to company, passing on information and issuing the much needed supplies. Staff Sergeant Richards’ outstanding display of aggressiveness, devotion to duty and personal bravery are in keeping with the finest traditions of the military service and reflects great credit upon himself, the 1st Infantry Division, and the United States Army.