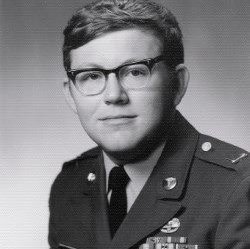 For heroism, not involving participation in aerial flight, in connection with military operations against a hostile force in the Republic of Vietnam.  Specialist Four Keefe distinguished himself by exceptionally valorous actions on 28 October 1968, while serving as a medical aidman with Company A, 2d Battalion (Airmobile), 5th Cavalry during a search and destroy mission near Quang Tri, Republic of Vietnam.  When his unit became heavily engaged with a large enemy force, Specialist Keefe exposed himself to the intense hostile fire as he moved to a forward position to administer first aid to the wounded platoon leader.  Although injured himself, Specialist Keefe continued to treat the wounded and assisted in their evacuation.  His display of personal bravery and devotion to duty is in keeping with the highest traditions of the military service, and reflects great credit upon himself, his unit, and the United States Army.