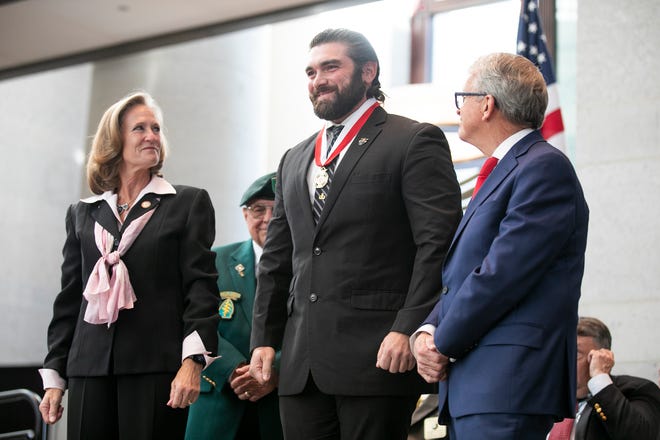 Sergeant First Class Kurt B. Barger, United States Army, heroically distinguished himself by exceptionally valorous conduct in the face of the enemy of the United States as the Senior Medical Sergeant, Special Forces Operational Detachment-Alpha 3233, Special Operations Task Force-Northeast, Bagram Airfield, Afghanistan, Combined Joint Special Operations Task Force-Afghanistan in support of Operation ENDURING FREEDOM.  On 19 December 2013, Sergeant Barger was part of a ground force consisting of Afghan National Army Special Forces Operational Detachment Alpha 2011 and ODA 3233 conducting a ground infiltration to a blocking position for a named operation.  The Commando operation targeted known enemy command and control nodes and a well-trained cadre of enemy fighters located in Wazir village, Khogyani District, Nangarhar Province.  Along the infiltration route, the main mounted element was stopped to clear an IED.  While Sergeant Barger’s element was halted, they became pinned down by extremely accurate sniper fire and PKM fire from three separate fighting positions concealed by a labyrinth of walls and dense vegetation.  Sergeant Barger, knowing that his fellow teammates were pinned down in the kill zone and unable to move, rushed into action.  With complete disregard for his own safety, Sergeant Barger openly exposed himself to enemy fire to draw the insurgents’ attention to his location; heavy barrages of fire were impacting within inches of his position.  Disregarding the enemy fire, Sergeant Barger continued to emplace his 60mm mortar system in order to gain fire superiority and to allow fellow ODA members to reposition their element and reengage the insurgent forces.  Sergeant Barger’s accuracy and volume of fire with the 60mm mortar was successful in effectively suppressing the enemy positions.  While the enemy attempted to maneuver and regain fire superiority, Sergeant Barger continued to use his personal weapons system to lay down an overwhelming base of fire that ultimately allowed his team members to reach a covered position.  Sergeant Barger, with complete disregard for his own safety, continued to expose himself to enemy fire in order to fight this aggressive insurgent force until the main mounted element reduced the IED along the main infiltration route.  Once all elements were able to consolidate and reorganize, they were able to continue their mission.  Sergeant First Class Barger’s actions are in keeping with the finest traditions of military heroism and reflect distinct credit upon himself, the Combined Joint Special Operations Task Force-Afghanistan, the Special Operations Joint Task Force-Afghanistan, and the United States Army.  He entered the service from Broadview Heights, Ohio.