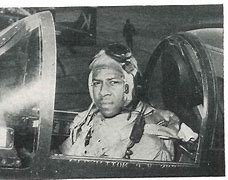 Ensign Jesse L. Brown, served with Fighting Squadron (VF) 32 aboard the Essex class Carrier USS Leyte (CV 32) which arrived on station off the coast of Korea on 12 October 1950.  Over the next seven and one-half weeks, Brown would take part in twenty combat missions, conducting air strikes on enemy targets in close air support of U.S. Marines.  On the afternoon of 4 December 1950, Brown took off from the Leyte in his Vought F4U Corsair, and with five other squadron pilots embarked upon a mission to the Chosin Reservoir to provide close air support for 15,000 U.S. Marines who were significantly outnumbered and surrounded by Chinese troops.  With his plane apparently struck by gunfire and losing fuel pressure, Brown crash-landed in enemy territory on a snow-covered mountainside west of the lake.  Although Brown survived the impact, he was pinned in his smoldering plane.  Brown’s wingman, Lt.(j.g.) Thomas J. Hudner Jr. crash-landed nearby and assisted in the unsuccessful rescue attempt which included packing snow around the fuselage in the effort to prevent flames from reaching Ens. Brown and guiding a rescue helicopter into the area.  Lt. (j.g.) Thomas Hudner Jr. was later awarded to medal of honor for his actions at the scene.  Ensign Jesse L. Brown died trapped in his plane, from internal injuries and exposure to the sub-zero weather conditions.  Ensign Jesse L. Brown was posthumously awarded the Distinguished Flying Cross and Purple Heart for his actions that day.  His heroism in support of trapped Marines at the Chosin Reservoir reflect great credit upon himself, his unit and the United States Navy.