For heroism in connection with military operations against a hostile force in the Republic of Vietnam: Specialist Five Gallaher distinguished himself by heroism on 19 July 1970 while serving as advisor to a Camp Strike Force operation. After setting up a hasty perimeter to plan further movement the element was subjected to a withering attack of B-40 rockets, 82mm mortar fire and automatic weapons. Immediately after the fire lifted two NVA soldiers ran up a ravine which was a blind spot in the CIDG perimeter. This area was also in the opposite direction from which the hostile had previously come. The first NVA raised his weapon preparing to fire a burst directly into the CIDG command element which was planning future movements on a terrain map. Detecting the NVA from the corner of his eye, a team member attacked and killed him. Specialist Gallaher who was covering the team member during this contact, immediately fired at and killed a second NVA who had fired a burst at the team member. As the NVA soldier collapsed, Specialist Gallaher ran to the mouth of the ravine and put down heavy suppressive which stopped further enemy infiltration through this approach. Specialist Gallaher is credited with saving his team member from being shot by this second NVA soldier and single-handedly blocking the NVA route of advance up the ravine. Specialist Five Gallaher’s valorous actions were in keeping with the highest traditions of the military service and reflect great credit upon himself, Special Forces and the United States Army. 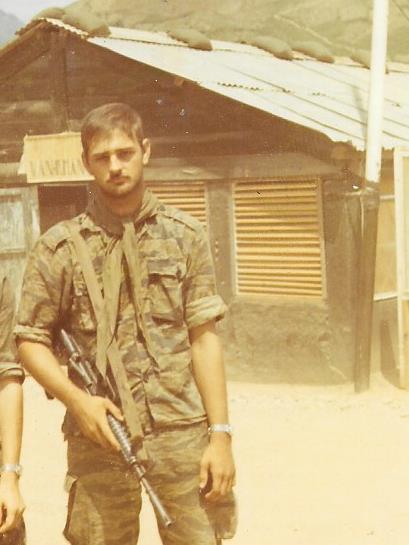