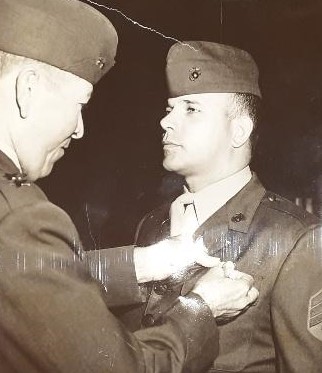 For conspicuous gallantry and intrepidity in action while serving as an Engineer Equipment Foreman with Headquarters Company, Eleventh Engineer Battalion, Third Marine Division in connection with operations against the enemy in the Republic of Vietnam. While assigned to an engineer element engaged in clearing fields of fire around Marine positions at Con Thien in Quang Tri Province, Sergeant Calabria also served as a member of a reaction platoon consisting of engineer equipment operators, mechanics and other miscellaneous engineer personnel. Early in the morning of 8 May 1967, an estimated force of two reinforced battalions of north Vietnamese Army Regulars launched a night attack on Con Thien, directing their main thrust against the sector defended by Company D, First Battalion, Fourth Marines and overrunning several positions, inflicting numerous casualties. Responding immediately, the reaction force quickly advanced fifty meters across an airstrip, took up positions within the trench lines and aggressively countered the fanatical enemy assault. Upon arrival at his assigned position, Sergeant Calabria discovered that a bunker within the perimeter had been overrun and occupied by the enemy. Displaying exceptional leadership and courage, he immediately established a base of fire and, singlehanded, assaulted the bunker with hand grenades. Although knocked to the ground twice by satchel charges thrown from the bunker, he steadfastly continued his aggressive assault until he had killed six of the enemy and recaptured the position. Aware of the urgent need for ammunition, Sergeant Calabria, undaunted by the intense hostile fire and with complete disregard for his own safety, moved to a disabled tank, retrieved the ammunition aboard and distributed it to the Marines. After the enemy assault had been repulsed, he accompanied a detail assigned to clear enemy positions outside the perimeter wire. When the detail came under intense enemy small arms fire, he repeatedly exposed himself to the hostile fire as he maneuvered to a position from which he killed the North Vietnamese with hand grenades. By his bold initiative, courageous action and fearless devotion to duty at great personal risk, Sergeant Calabria upheld the highest traditions of the Marine Corps and of the United States Naval Service.