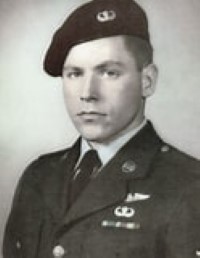 The President of the United States takes pleasure in presenting       a Second Oak Leaf Cluster in lieu of a Third Silver Star Medal     to James D. Locker, Sergeant, 37th Air Rescue and Recovery Squadron, 7th Air Force, for gallantry in connections with military operations against an opposing armed force as a rescue specialist on an HH-3E “Jolly Green Giant” helicopter in Southeast Asia, southwest Hue, South Vietnam on 9 June 1968.  On that date, Sergeant Locker participated in the attempted rescue of a downed pilot in one of the most heavily defended areas in Southeast Asia.  Despite intense, accurately directed hostile fire which severely damaged another aircraft, Sergeant Locker, with undaunted determination, indomitable courage, and professional skill, stood in the open helicopter doorway awaiting deployment to assist the downed pilot when his aircraft was downed by hostile fire.  By his gallantry and devotion to duty, Sergeant Locker has reflected great credit upon himself and the United States Air Force.

Postscript: Sgt. James D. Locker’s remains were repatriated along with his fellow crewmembers to the United States in February, 2003.  He was interred with full military honors 18 October 2003 in Sidney, Ohio.