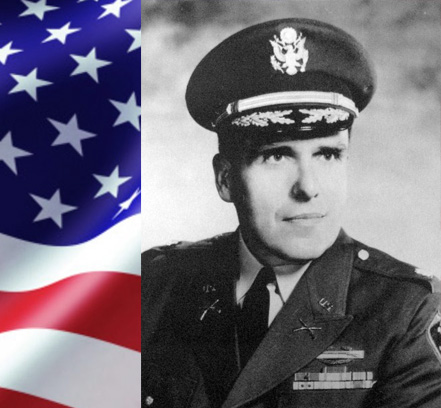 First Lieutenant (Infantry) W. Wallace Stover, United States Army, was awarded the Distinguished Service Cross for extraordinary heroism in connection with military operations against an armed enemy while serving with the 129th Infantry Regiment, 37th Infantry Division, in action against enemy forces on

29 November 1943, in the vicinity of Bougainville, Solomon Islands.  After previous unsuccessful attempts to rescue an ambushed patrol had cost three lives, Lt. Stover undertook the rescue of a trapped patrol hidden within a cave under the muzzles of Japanese machine guns and sniper rifles.  Lt. Stover took five men with him to provide covering fire, and, while constantly threatened by strong fire which covered the cave and its approaches, Lt. Stover crawled on his stomach up a shallow gully of the cliff face.  Ordering his men to conceal themselves and cover him, he leaped on the ledge and into the cave.  He shouldered a wounded man and slid back over the ledge of the bluff, (thus) guiding the rest of the patrol to safety.  Lieutenant Stover’s bravery, superior reconnaissance prior to the rescue and complete control over his men made it possible for him to accomplish the hazardous mission without additional casualties.  His regimental commander credited him with saving the lives of the two wounded men who might not have received needed medical aid in time.  The skill and daring with which he executed the dangerous task was an inspiration to his entire company.  First Lieutenant Stover’s intrepid actions, personal bravery and zealous devotion to duty exemplify the highest traditions of the military forces of the United States and reflect great credit upon himself, the 37th Infantry Division, and the United States Army.