For heroism while participating in aerial flight evidenced by voluntary actions above and beyond the call of duty: Awarded on December 21, 1969, Chief Warrant Officer Walls distinguished himself by exceptionally valorous actions while flying with heavy fire team of helicopter gunships in support of a forty- man reconnaissance team which had encountered heavy enemy fire. Immediately discerning the location and disposition of both the friendly and enemy forces, he utilized his aircraft integral weapon system and as he attacked the heavily fortified enemy positions he received machinegun fire, along with anti-aircraft and small arms fire from all directions. Despite intense enemy fire, he continued to place accurate fire on the advancing enemy. Due to the close proximity of the enemy to the Allied ground unit, he had to fire within 20 meters of the reconnaissance team and expose himself to even more enemy fire. Despite the intense fire, he continued to place deadly fire on the enemy and with complete disregard for his own safety, he flew pass after pass at the enemy positions. Largely through bold attacks, the enemy siege was broken and the enemy retreated to a bunker complex. The Allied ground element was then reinforced by an eighty-man element and they moved against the enemy in the bunker complex. Almost immediately the combined allied forces were pinned down by withering automatic weapons and rocket fire and once again these men were called upon for extremely close aerial fire support. Because the allied unit was so close and trying to advance, he and the other pilots made repeated tree top level passes firing to keep the enemy down. This maneuver was a complete success and allowed the friendly element to sweep the complex as the enemy ran in disoriented flight, leaving enemy dead. Chief Warrant Officer 2 Walls outstanding aerial maneuvers and deadly suppressive fire proved vital to the success of the mission. His actions were in keeping with the highest traditions of the military service and reflect great credit upon himself, his unit and the United States Army. 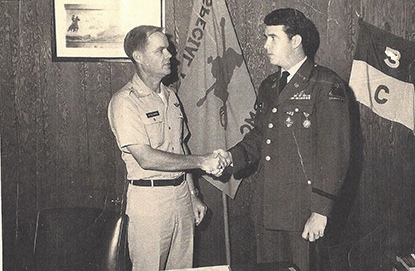