For gallantry in connection with Union military action against Confederate armed forces on April 3, 1865 at the Third Battle for Petersburg, Virginia.  Union forces had broken through the Confederate ranks after 292 days of siege warfare.  This action initiated the Appomattox Campaign.  Sergeant Blickensderfer, serving with Company E, 126th Ohio Volunteer Infantry, was awarded the Medal of Honor for capturing a Confederate Flag during the engagement.  He passed away in 1916 and is buried at East Lawn Cemetery, Sugarcreek, Ohio. 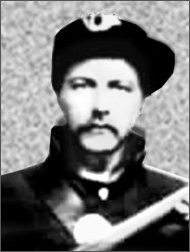