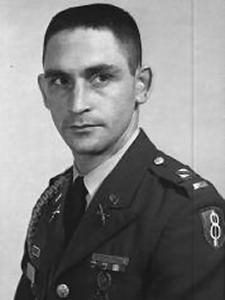 Captain Keaton led his company through a dense nipa palm and jungle area suspected of being heavily booby-trapped.  Captain Keaton had assumed his usual position at the head of his company to lead his men more effectively.  Concerned about the safety of his point man, Captain Keaton positioned himself just behind him.  As they moved along a trail toward a woodline, the point man tripped a wire leading to an explosive device.  Instantly recognizing the sound of a grenade being activated, Captain Keaton pushed the point man out of the way of the explosion and shielded his comrade from the blast with his own body.  Although mortally wounded by the explosion, Captain Keaton saved the life of one of his own men. Captain Keaton’s heroic actions were in keeping with the highest traditions of the military service and reflect great credit upon himself, his unit and the United States Army.  His fellow soldiers subsequently renamed their base camp in Vietnam Camp Keaton in his honor.  He entered the service from Waverly, Ohio and is buried at Arlington National Cemetery.