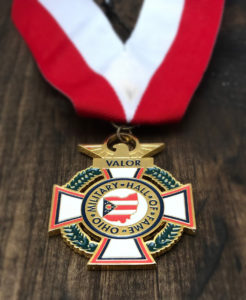 Ed Arthur envisioned and designed the Ohio Medal of Valor over a period of time beginning in 1990. It represents all that its recipients sacrificed for freedom as well as singles out the recipient as representing his or her home state – Ohio.

Most importantly, Arthur wanted all its recipients to be proud to wear this medal to share their love of their country and the State of Ohio, and so that the greater population can reach out to the veteran and reciprocate that respect and devotion to service.

Components of the Medal
The green wreath in the background is in memory of those soldiers who died in battle, but are not to be forgotten.

The cross is not a religious symbol, but rather represents the four corners of the world in which our military have served.

The eagle is present because this award is for having served in a national military branch of service.

So as not to be confused with other awards, Arthur wanted all who see its recipient wearing this medal to have no doubt as to why it was awarded – hence the word “Valor.”

The red and white ribbon attached to the medal is symbolic of the blood that was shed and the lives that were lost.

The adaptation of red, white, and blue within the medals are symbolic of our nation’s Stars and Stripes and the State of Ohio pennant colors and what they represent.