For heroism while participating in aerial flight: Specialist Four Smolic distinguished himself by heroic actions on 31 January 1968, while serving as crew chief of a UH-1D helicopter from Company A, 25th Aviation Battalion on a combat operation for the Tan Son Nhut defense command northwest of Saigon, Republic of Vietnam. When Specialist Smolic was informed that thirty-five men were surrounded in their quarters at the air base without weapons, ammunition, or food supplies, he volunteered to fly the necessary supplies to the trapped personnel. Total darkness, many obstacles, and enemy sniper fire did not deter Specialist Smolic as his aircraft maneuvered along a selected route to its objective. He provided extremely accurate suppressive machine gun fire in defense of the objective and voluntarily exposed himself to intense enemy automatic weapons fire from all sides to assist in unloading the much needed supplies. His valorous actions undoubtedly prevented many causalities and contributed immeasurably to the success of the mission and defeat of the enemy force. Specialist Smolic’s personal bravery, aggressiveness, and devotion to duty are in keeping with the highest traditions of the military service and reflect great credit upon himself, his unit, the 25th Infantry Division, and the United States Army. 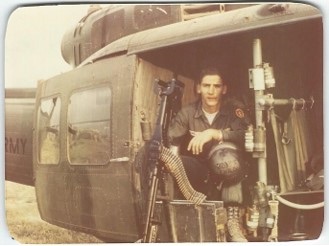