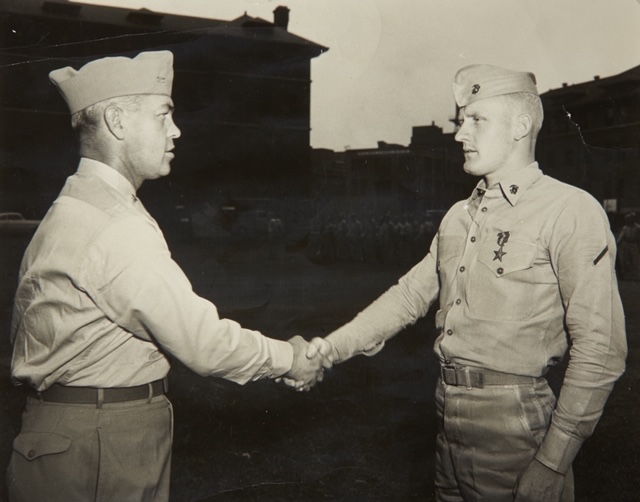 For heroic achievement in connection with operations against the enemy while serving with a Marine infantry company in KOREA on 15 March 1951. Private First Class HAHN serving as a rocket launcher gunner attached to an infantry platoon, displayed outstanding skill, courage and confidence in the performance of his duties. On one occasion while assaulting strong, well-entrenched enemy positions, his platoon was pinned down by accurate fire from a concealed enemy mortar position. Though subjected to direct enemy small arms, mortar and machine gun fire, he fearlessly moved forward to an exposed position in order to locate and destroy the mortar emplacement. With complete disregard for his own personal safety, he remained in the exposed position directing the fire of his rocket launcher on the enemy mortar emplacement until it was completely neutralized. His initiative and aggressive actions enabled his platoon to continue their assault, thereby setting an example for all who served with him and materially contributing to the success achieved by his company. Private First Class HAHN’s courageous actions were in keeping with the highest traditions of the United States Naval Service.