For heroism in connection with military operations against a hostile force:  Captain Bonnell distinguished himself by heroic action on 4 June 1969 while serving as Senior Advisor, 34th Ranger Battalion, 6th Ranger Group, Army of the Republic of Vietnam. On that date Captain Bonnell and the battalion headquarters element were engaged in a helicopter recovery operation on the Rach Ong Keo River. Even though Captain Bonnell knew there was a main force Viet Cong sapper battalion operating in the area he constantly exposed himself while checking and advising his counterpart on the security of the area. After he was satisfied with the defense, he volunteered his service to the rescue party. Later, upon arrival of an Army river patrol boat, he went on board and took control of its operation. At 1500 hours, Captain Bonnell spotted movement on the shore and ordered the boat to open fire. The fire was returned by heavy automatic weapons fire wounding him and one of the gunners. In spite of his intense pain, still fully exposed to fire, Captain Bonnell continued to direct firing runs by the boat and also directed gunships into the area. Once he was satisfied the gunship fire was effective, he ordered the patrol boat to return to the crash site and then personally directed the medical evacuation of the wounded gunner. Refusing to be evaculated himself, Captain Bonnell again returned to the sense of the contact with the boat and continued to direct the fire. While still in heavy contact a helicopter arrived on station to retrieve the downed aircraft. During this entire period and although under intense pain, he remained in his position. His efforts were directly responsible for the success of the operation, the safety of the recovery force and averting a probable helicopter ambush. Captain Bonnell’s heroic actions were in keeping with the highest traditions of the United States Army and reflect great credit upon himself and the military service. 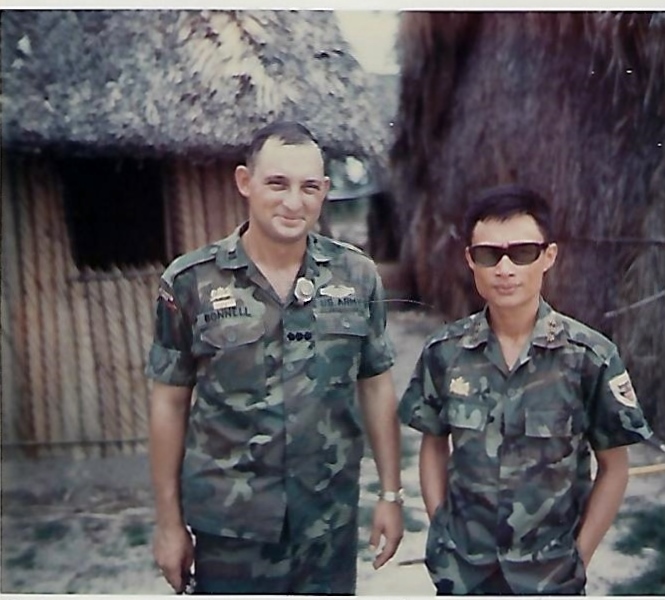