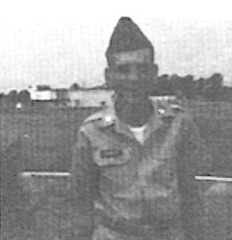 For Heroism not involving participation in aerial flight, in connection with military operations against a hostile force in the Republic of Vietnam on 3 January 1970: On this date, Private First Class Eicheler was serving as a radio-telephone operator with his unit on a reconnaissance in force operation approximately 6 miles northwest of Lai Khe. As the point element cautiously maneuvered through the treacherous terrain, the point man tripped a booby trap which detonated and instantly killed 3 friendly soldiers. Private First Class Eicheler and 7 other men were seriously wounded. Despite the fact that enemy soldiers were undoubtedly in the area, Private First Class Eicheler ignored his wounds as he immediately radioed for medical aid and an evacuation aircraft. His courageous initiative and exemplary professionalism significantly contributed to the prompt evacuation of his comrades and to saving several friendly lives. His quick actions and selfless concern distinguish him as a soldier of the highest caliber. Private First Class Eicheler’s outstanding display of aggressiveness, devotion to duty and personal bravery is in keeping with the finest traditions of the military service and reflect great credit upon himself, the 1st Infantry Division and the United States Army. Private First Class Gary E. Eicheler ultimately died of wounds suffered on this date. The award was announced posthumously on 30 January 1970.